In the autumn of 1870, in the midst of the Franco-Prussian War, Monet and his wife left France for exile in London, where they remained until June 1871. There the artist painted this panorama of a park in the heart of the city. In later years Monet would return to London, painting numerous views of city sights, including the Houses of Parliament.

Tsukioka Yoshitoshi
Cherry, from the series Beauties and the Seven Flowers (Bijin shichiyōka), 1878 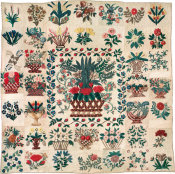 Camille Corot
House in the Village of Saint-Martin, near Boulogne-sur-Mer, 1860-1865

Claude Monet
Path on the Island of Saint Martin, Vétheuil, 1881