Courbet's paintings of nudes shocked his contemporaries with their naturalism. Unidealized and faithfully depicted, the figures look like ordinary women, which made their nakedness all the more pronounced and disturbing to contemporaries unused to such realism. In Nude Reclining by the Sea, Courbet counters some of this criticism by creating a beautiful but ambiguous picture of a nude woman who is neither a bather nor part of a narrative; in fact, the ships on the horizon seem to suggest that this is an ordinary day by the sea. Sprawled beneath a billowing sail, the woman recalls an odalisque or female slave lying seductively on a fur, yet her pose, with arms raised above her head, was a conventional one for studio models. The juxtaposition of the sea and a nude woman--both thought to be governed by powerful, natural forces--would have been a highly erotic combination for French audiences in the mid-nineteenth century. The small scale and the sensuousness of the picture suggest that rather than creating an intentionally provocative subject, Courbet hoped the work would appeal to a collector. Jennifer A. Thompson, from Masterpieces from the Philadelphia Museum of Art: Impressionism and Modern Art (2007), p. 42

Totoya Hokkei
Peasants Being Ferried Across the Sumida River at Full Moon, 1833 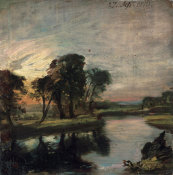 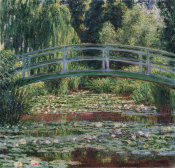 Paul Cézanne
View of the Bay of Marseille with the Village of Saint Henri, c. 1883