Beginning in the 1920s, Charles Sheeler played a central role in the development of Precisionism, a modernist movement characterized by a crisp, sharply defined style that united the desire for a distinctly American art with the lessons of the Parisian avant-garde. In Cactus, he continues the rigorous pursuit of clarity and order that had marked his Precisionist studies of such vernacular emblems of the United States as barns, Shaker furniture, and factories. As was often the case, Sheeler based this painting on one of his own photographs (here a set used for one of his commercial shoots), rendering the plant, pedestal, and lamps as well as the variations in light and shadow with photographic exactitude. Sheeler's early sympathy with Cubism also remains apparent, for he has transformed this seemingly straightforward document of his working life into a complex interplay of forms in a shallow, ambiguous space. Oddly, however, Sheeler's severe and analytic approach has produced a highly enigmatic image, as the denuded cactus, stripped of its spikes, sits forlornly beneath an unplugged light. John B. Ravenal, from Philadelphia Museum of Art: Handbook of the Collections (1995), p. 324 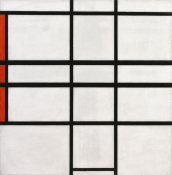 John Lewis Krimmel
Pepper-Pot: A Scene in the Philadelphia Market, 1811