Richter has lived through a tumultuous time in Germany, and while his work only rarely confronts specific political issues, it is touched deeply by the drama of his historical circumstances. He was born in 1932 in a small village near Dresden, and as a boy his art school and museum experience was defined by Hitler's anti-modernist dictates. Richter left for West Germany in 1961 and soon enrolled at the Düsseldorf Art Academy. There he came under the influence of Joseph Beuys, who was leading a one-man campaign to bring German art back into the twentieth century after decades of repression. But whereas Beuys's efforts centered on sculpture and performance, many of his students, such as Richter, sought to renew the tradition of painting. First reacting directly to the influence of Pop art in the early sixties, Richter set off on a personal journey that allowed the restless exploration of manifold themes and techniques. His rejection of aesthetic ideology was a moral choice.

Swan (2) hails from 1989, a year in which Richter made an unusually large number of majestic abstract paintings. His "abstractions" are conspicuously real in their lavish attention to the concrete components of structure, paint, and surface. In Richter's three closely related, identically sized Swan paintings, the striated composition seems to dissolve before one's eyes, and the colors threaten to disappear into black and white. This remarkably fluid, mysteriously compelling painting encapsulates both the rigor and the vulnerability at the center of Richter's enterprise. Ann Temkin, from Philadelphia Museum of Art: Gifts in Honor of the 125th Anniversary (2002), p. 159 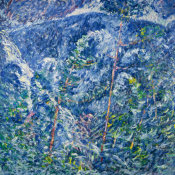 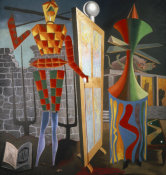