For Edward Hicks, a zealous Quaker preacher and missionary, making a living by painting portraits or other symbols of self-indulgence was incompatible with his religious beliefs. Yet his greatest talent was as an artist, so to satisfy both his image-making impulse and his Quaker convictions, he made nearly a hundred paintings on the biblical theme of the Peaceable Kingdom, to which Noah's Ark, although a unique subject among his work, is clearly related. Hicks based the general composition of the scene on Nathaniel Currier's popular lithograph issued in 1844, but gave the pairs of animals a beauty and dignity lacking in the print. As a result, the calm procession of beasts has a stately rhythm that embodies the gravity of God's command that they enter to ark to escape the approaching flood. The grayish green horizon with looming black clouds above intensifies the drama of the impending cataclysm, and the dignified old lion staring directly at the viewer focuses attention upon this lesson of God's power to destroy and redeem. Darrel Sewell, from Philadelphia Museum of Art: Handbook of the Collections (1995), p. 281

Tsukioka Yoshitoshi
I Want to Cancel My Subscription (Woman Reading a Newspaper), 1878

Thomas Cole
Landscape, the Seat of Mr. Featherstonhaugh in the Distance, 1826 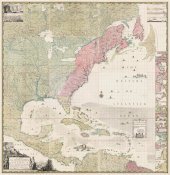 Henry Popple
Map of the British Empire in America, 1733