Monet had already made the small country village of Giverny, located forty miles northwest of Paris, his home for ten years when in 1893 he purchased nearby land to create a garden that would provide him with material to paint on rainy days or when he was not traveling. The elaborate water lily pond and the gardens surrounding Monet's home and studio became two of the most prevalent, recurring motifs of the last thirty years of his career. An arched bridge, inspired by those in Japanese woodcuts, was a frequent focus of his work in 1899 and 1900, while in subsequent works he turned his focus downward onto the pond itself, with its water lilies and reflections. In this nearly square picture, painted near the end of his life, Monet returned to the subject of the bridge, but it has been transformed by his exuberant brushwork and color. An almost indistinct mass, the bridge is engulfed by an arbor and trailing wisteria that had since been added (and which were tended by the six gardeners that Monet employed). Lavishly covered in paint that is caked on the surface in mounds, the picture is a forceful assertion of the aging painter's unrelenting desire to capture the dazzling effects of the landscape around him. Jennifer A. Thompson, from Masterpieces from the Philadelphia Museum of Art: Impressionism and Modern Art (2007), p. 78 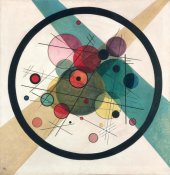 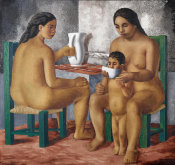 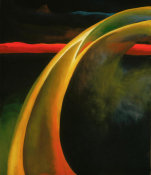