In the autumn of 1894, Cézanne accepted an invitation to visit Claude Monet at Giverny, settling nearby at the Hôtel Baudry. Other artists, including Mary Cassatt, Pierre-Auguste Renoir, and Auguste Rodin, came from Paris for gatherings that Monet organized, but despite the hospitality and the reported gaiety of these occasions, Cézanne, who was shy and uncomfortable in company, left abruptly following a misunderstanding at the end of November. This painting of an orchard next to the hotel was left behind, and the hotel proprietress, recognizing its value, retained it as compensation for Cézanne's unpaid bill. The work is a remarkable revelation of the way in which Cézanne constructed pictures. Using a thin brush laden with gray paint, he drew the outlines of trees, the orchard wall, and the gables of adjacent buildings. Patches of pale color are thinly applied to the ground and houses, leaving areas of blank canvas around each object. Cézanne intended for these lighter underlayers to infuse the canvas with luminous color and would gradually have painted over them with darker paint. Even in its unfinished state, the picture holds together and exerts a powerful, organic pull. Jennifer A. Thompson, from Masterpieces from the Philadelphia Museum of Art: Impressionism and Modern Art (2007), p. 98

Tsukioka Yoshitoshi
Murasaki Shikibu in the Temple at Mt. Ishiyama by Moonlight, 1889 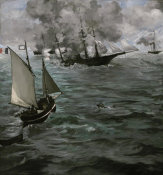