Wassily Kandinsky's statement that "painting is like a thundering collision of different worlds that are destined in and through conflict to create that new world called the work" finds colorful expression in this dynamic painting, in which blue, red, and green lines intersect with large areas of yellows, purples, and pinks. One of the founders of Der Blaue Reiter (The Blue Rider), a group of Expressionist artists in Munich, Kandinsky was among the first painters to produce abstract works, which he called Improvisations. Inspired by the relationship between music and painting, he valued shapes, lines, and colors as carriers of spontaneous emotional and spiritual expression. Kandinsky created Little Painting with Yellow in Munich just before the outbreak of World War I, which forced him to return to Russia. No doubt affected by the increasingly unstable political environment and his belief in the imminence of the Apocalypse, he painted a whirlwind of explosive lines and colors that suggest both the terror of catastrophe and the elation of rebirth. In his influential essay Concerning the Spiritual in Art (1911), Kandinsky linked certain colors with emotions and sounds. Little Painting with Yellow is a moving combination of repeating rhythmic forms, colorful harmonies, and jarring dissonances. Emily Hage, from Masterpieces from the Philadelphia Museum of Art: Impressionism and Modern Art (2007), p. 132 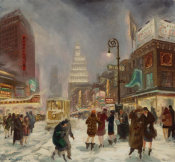