Pertaining to Yachts and Yachting, 1922

In the early 1920s, the photographer Paul Strand proposed a film project to Charles Sheeler (his collaborator on the 1920 film Manhatta) involving the New York Yacht Club. Never a sportsman, Sheeler may have studied the sailboats at the yacht club in anticipation of this never-realized film. One of several works on this subject, the Cubist-inspired Pertaining to Yachts and Yachting eloquently suggests the swift movement of several large vessels in the ocean, giving the viewer what one scholar called a "full yachting experience." 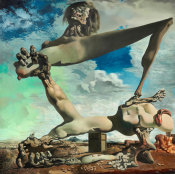