Hortense Figuet, the subject of more than forty-four paintings and drawings by Cézanne, was the artist's mistress, model, and, later, wife. The two met in Paris in 1869 when she began to sit for him, and they had a son in 1872 but did not marry until 1886, when family pressures and a desire to legitimize their now fourteen-year-old son intervened. The couple often lived apart owing to Hortense's preference for city life, but she never ceased to pose for Cézanne, who found her oval face a captivating subject. Dating these portraits is difficult because Hortense's hairstyle and clothing are often similar and are not depicted in sufficient detail to suggest contemporary fashions. Nevertheless, a date during the second of three periods in which Cézanne made a series of portraits of Hortense can be suggested, or around 1885-87, when she was about thirty-five years old. Unusually for Cézanne, this is a reflective and psychological portrait, with Hortense's tilted head and upraised chin giving her an alert, inquiring look. Fragments of a vine and a wall in the upper portion of the canvas suggest an outdoor setting, as does the subject's heavy jacket and the pale blue background. Jennifer A. Thompson, from Masterpieces from the Philadelphia Museum of Art: Impressionism and Modern Art (2007), p. 96.

Utagawa Hiroshige I
The Armor-Hanging Pine on Eight Views Slope, 1856 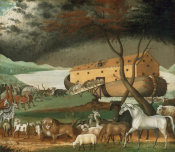 Joseph Mallord William Turner
The Burning of the Houses of Lords and Commons, October 16, 1834